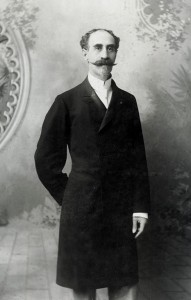 If a non-magician were asked to create the image of a magician they would undoubtedly draw a picture of a tall, thin man sporting a goatee and twisted mustache. His costume would include a black tailcoat and knee britches. It is doubtful that our layman would realize they had drawn a picture of Alexander Herrmann, a French magician who died in 1896. Even though Herrmann vanished off this earthly orb 120 years ago, it is his image that still defines how the public perceives the classic magician.

Born in Paris in 1844, Alexander was the youngest of sixteen children. His father, Samuel, and his oldest brother, Carl, were both magicians and much to his father’s dismay Alexander hoped to follow in their footsteps. For years he apprenticed with his brother traveling through Russia, Europe and America, learning the tricks of the trade. He established himself as a magician of the highest order during an engagement at London’s Egyptian Hall that lasted for an astonishing one thousand nights. It was during this engagement that he met a twenty-two-year-old dancer named Adelaide Scarcez. The mayor of New York City conducted their marriage ceremony in 1875.

The years that Herrmann spent touring throughout America demonstrating his considerable sleight-of-hand skills and performing jaw-dropping stage illusions made him a star of the highest magnitude, who earned enormous sums of money. He and Adelaide lived like royalty with a mansion in Whitestone Landing on Long Island, New York, they enjoyed their private yacht called Fra Diavolo, and an extravagant railway car that once belonged to Lily Langtry.

Alexander was Herrmann the Great every waking moment. He never missed an opportunity to perform impromptu tricks for dinner guests and was known to cut open an orange at a fruit stand only to remove a gold coin. To support his opulent lifestyle Herrmann spent his money as fast as he earned it.  This fairytale life came to a sudden end when Herrmann succumbed to a heart attack while riding in his train car in 1896. Adelaide had no money to speak of but she did possess one great asset; the name Herrmann.

Egyptian Hall Museum is the oldest private magic museum in America, started in 1895 by W.W. Durbin and later nurtured for nearly fifty years by David Price of Brentwood, Tennessee. Mike Caveney and George Daily acquired the museum in 2000 and today Mike curates the collection in Pasadena, California. Mike Caveney is a well known magician, historian, writer and publisher of books on the history and practice of magic. His historical works include biographies on The Great Leon, Servais Le Roy, Harry Kellar and Charles Carter. For Taschen Books he co-wrote a massive tome called MAGIC 1400s–1950 which has been translated into six languages.