We are back from Magic-Con and are still trying to wrap our heads around how awesome it was. Dan Buck, Dave Buck, and Syd Segal really did a great job assembling an amazing line up of performers and organizing events that would get the most out of their presence.

Two members of our Board of Directors, Bill Kalush and David Blaine, were presenters at the event and our student in residence, Ricky Smith, did his best to help out from time to time. David Blaine was on stage for a special question and answer session hosted by Dan and Dave with some very interesting and insightful questions and responses.

Mr. Kalush did a lecture on the importance of studying magic history and some of the benefits he has received through his own studies. He also did a talk on Ask Alexander where he explained the basics of the project and also some of the new features available in Ask Alexander 2.0. Additionally he spoke about his vision for Ask Alexander in the future and how we need help from computer savvy people to make it a reality. We were quite pleased that several people offered to volunteer some of their time and expertise, so, perhaps, Alexander will be unveiling some extra cool features in the near future. As a bonus for attendees, we also donated one month of free Ask Alexander membership (or a one month upgrade to a higher level for current members at the convention) at Charlier level to all the attendees. 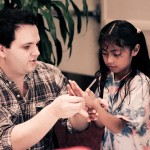 In addition to the convention, the organizers also knew the importance of giving back to the community. Taking advantage of the fact that they had assembled all of these great performers, they organized a performance and teaching session for the kids at the Salvation Army Ray and Joan Kroc Center. There were a number of very talented magicians working for about 60 kids, and it was a really fantastic event.

Congratulations to Dan and Dave and Syd on their success, and we are very excited about next year!