Some Memories of Charles Reynolds by Ricky Smith 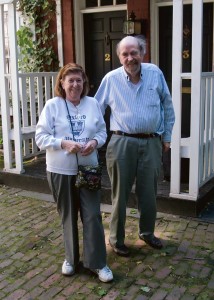 It is with great sadness that we write of Charles Reynolds’ recent passing. Brilliantly knowledgeable in magic perfomance and history, always friendly and charming, with his hat and cane (when he remembered them), Charles was persistently full of life all the moments he shared with us. While many have written wonderful thoughts about his life’s work and legacy of knowledge, I’d like to honor Charles by sharing a few of the things I learned spending time with him. So imagine Charles, at a meeting of magicians, jovially spoiling himself with a soda, or a scotch, telling stories full of famous magicians we all admire, remembering times and antics we are awed and humored by, all the while retaining his gentle nature and wise soul.

One story which Charles liked to tell was of a bit of conversation between Houdini and Al Flosso, which Charles had learned through Al’s son, Jackie. Al told Houdini, “Never, under any circumstances, tell the truth.” In fact, Charles’s memories of talking with these great characters always revealed small moments of personal experiences that don’t always come out in print. At one of our magic meetings, Charles related a bit of information about Houdini he had heard from Dunninger: That Houdini had a wonderful smile. Charles wistfully recalled Dunninger’s memory that, “Anything could go wrong at a Houdini performance and he could win them over with his smile.”

I always thought small memories like these were great to hear from Charles, especially this one, since you don’t often hear about Houdini making any mistakes, and I had not heard any stories about his smile.

Here is a bit of advice from Ali Bongo related to us through Charles: “If you can’t hide it, paint it red.” Another bit of Charles wisdom culled from his wide historical knowledge, “Everytime you pick up a prop your price goes down.”

Apparently the Professor, Dai Vernon, had picked up a little bit of French and would say in a melancholy, albeit tongue in cheek, manner, “Partir c’est mourir un peu” whenever a pretty waitress left his dinner table. It meant “to leave is to die a little” or more loosely “it hurts to say goodbye”, and reflected the great loss he felt by this beautiful lady leaving his presence. I was quite pleased that Charles  decided to recount this little characteristic of the Professor’s.

Charles was not particularly technically savvy and was not interested in getting caught up in the latest technology, like e-mail. However, during one of the meetings, one of the attendees was using their iPad to show some video clips, and we ended up watching video of Borra and Richiardi on YouTube. Charles got rather interested and asked what else was available on “The YouTube.” We explained that practically everything was available and searched for some of Charles’ favorite performers. Even though we knew we had found a weakness in his technological disinterest, Charles still surprised all of us at the next meeting when we were informed that he had acquired an iPad!

After viewing any magic act, Charles’ go-to method of discovering how it might be improved, what was wrong with it, where it went right, etc. was to utilize 3 key questions that relate to the 3 aspects of any magic performance. He brought these questions up frequently during our discussions, and they never failed to bring about some insight. He also never failed to credit the source for these questions: his wife, Regina! For those that are interested, he wrote them down, along with a variety of other thoughts and some effects in his lecture notes, Observations & Effects.

Hopefully you found these jottings entertaining. Charles was quite a wonderful man, and I will miss him very much.

If you would like to learn more about Charles please check the resources below: