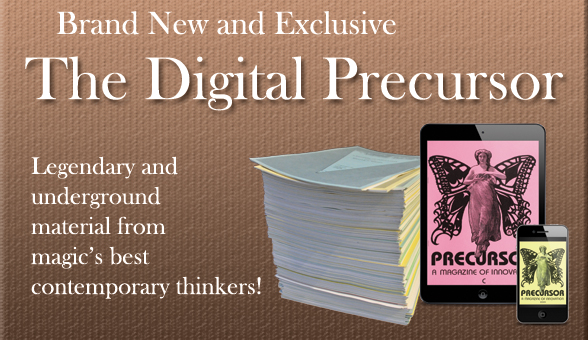 A brand new Conjuring Arts exclusive! The legendary Precursor magazine. Over 2600 pages of amazing content now available digitally to keep at your fingertips. *Only $149 for members of Conjuring Arts and $199 for all others.

Between the Spring of 1983 and the Spring of 2006 William Miesel and Ed Eckl collected some of the most amazing and astonishing magic secrets ever and printed them in the Precursor. Now for the first time ever, every single issue is available to be downloaded.

Intended from conception to be the heir of the venerable Ibidem, Miesel coaxed the most creative minds in magic to part with cherished secrets which he re-wrote and used to filled the pages of Precursor.

Miesel cleverly would accept concepts and problems along with fully fleshed out routines, and by opening up the pages of Precursor to unfinished thoughts his journal became the birthplace for a lot of important material.