Magic in a POW Camp – the Story of Gus Anckorn

We recently made friends with a ninety-five year old Magic Circle member named Fergus (Gus) Anckorn. Gus caught our attention not just because he is a skilled and experienced practitioner, but because his abilities as a magician are woven into an unbelievable tale of survival as a POW. He used magic to gain favor with his captors and boost his friends’ morale, and there are other aspects of his story so serendipitous that they too resemble magic.

We first encountered Gus while researching The Piddington’s. After publishing Barry Wiley’s brilliant piece on the Piddington’s in Gibecière Vol. 8 No. 2, we decided to investigate a bit further. Upon asking Eddie Dawes about Sydney Piddington, Braddon and the others, Eddie kindly informed us that “Gus Anckorn was there at Changi too and you can still speak to him!” It turns out that the Piddington’s world famous telepathy act, unlike anything else in magic at the time, was developed in large part by Gus and Sydney Piddington while the two were in Changi Prison during the war. (You can listen to a full recording of the act by clicking HERE). With the lead provided by Mr. Dawes, we found our way to London and managed (with the help of a number of people including Matthew Field and Peter Lane) to meet Gus and arrange a visit to his home. At ninty-three, Gus has more energy than many a third of  his age. He performed excellent magic for hours on end and told us many stories about his life as a prisoner of the Japanese. 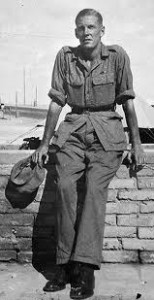 Many details of Gus’s terrifying yet charmed life is described in Peter Fyans book Captivity, Slavery, Survival as a Far East POW: Conjuror on the Kwai. During his years as a prisoner, he was blown up; left for dead in a ditch; water boarded with ether; shot through the back of the knee; covered in burning creosote; and forced to work on the infamous Burma railway. For much of this time, Gus’s right hand was incapacitated and his leg was so damaged that he needed to drag it with a piece of rope in order to walk.

Despite many gruesome episodes, Gus considers himself the luckiest man in the world. After his right hand was nearly blown off by  bombers, he found himself in bed at the Alexandra Military Hospital with a poorly tied tourniquet around his arm. He saw that the walking wounded and the entire hospital staff was being marched out the door and executed by Japanese soldiers. Bed-ridden patients were then stabbed to death with bayonets. However, Gus’s damaged arm was bleeding profusely over his chest, and the soldiers with bayonets assumed that he had already been executed. There are numerous similar moments in Gus’s story where an instance of bad luck placed him out of harm’s way just before an arbitrary massacre or explosion.

Beyond luck, however, Gus’s skill as a magician often kept him and his fellow prisoners fed and safe. The commandant of his prison camp took a particularly liking to magic and frequently requested performances. Gus quickly noticed that his captors, thinking of their prisoners as “verminous,” refused take back any objects that he’d borrowed and touched during his feats. For this reason he used a great variety of objects, making a coin appear in a can of fish, or manipulating bananas and cigarettes. All of this supplemented the small portions of rice that he and fellow prisoners were living on. Gus’s performances also resulted in less brutal treatment of  himself and his fellow prisoners.

There are many more twists, turns, and outright miracles that kept Gus alive. His life mixes together bravery with magic, wit, and the most well-timed luck imaginable. It makes for a humbling and inspiring adventure story. And it is a reminder that great magic has power.