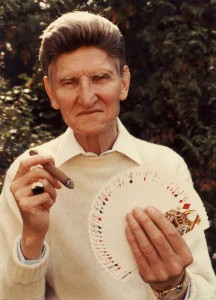 Recently, here at Conjuring Arts, we have been working on transcribing a large file of letters from Ed Marlo to Mel Brown. They span from 1954 to 1991 and are quite fascinating, containing gossip, reviews of books and videos, tricks and sleights, tips and finesses, etc. While the work on these is not finished, we thought we would whet the appetite by offering a small gallery of photos of Ed Marlo that we have in the archives. We believe that these were taken during his trip to Paris for Pierre Mayer’s convention. There is also video footage of Marlo that was taken during the trip which is available through Stevens Magic Emporium (Ed Marlo – A Private Lesson number 1 and number 2), if you want to see him in action during this period of his life.

For those that do not know much about Marlo and would like to know more you should definitely check out the new collections being put out by Magic Inc. in Chicago; these are a trilogy of books, two of which have been published so far, Revolutionary Card Technique and Cardially Yours. There are also some video resources, most notably, Prime Time Marlo and It’s all in the Cards. Also I have assembled some interesting articles and tricks, with the help of Ask Alexander, which may be of value to the enthusiast: 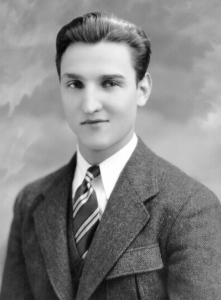 One of Marlo’s first publishing efforts was to enter into Tops magazine’s “It’s a Pip” contest. He entered three ideas into the contest, which is not surprising considering the vast creativity he would demonstrate for the rest of his career. Note that he was still using his given name Edward Malkowski with a nickname, “Marko”, which his friends had given him. 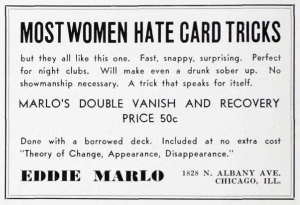 The following ads represent Marlo’s first attempts to market his material to magician’s. Both of them feature Marlo’s “Double Vanish and Recovery” which is an effect wherein two cards vanish from the deck, then one reappears face up in the middle, and then the face up card is used to locate the other card. Additionally the effect included “Theory of Change, Disappearance and Reappearance” which was an essay featuring the idea that any standard color change could be used to create the effect of a change, a vanish, or a production. The “Casanova Card Trick” utilized the mechanics 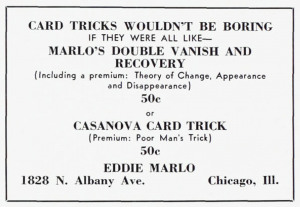 behind the vanish in “Double Vanish and Recovery” to produce the four Queens. Finally we see “Poor Man’s Trick” in which the performer made a penny travel through his head into a glass and then the penny was placed in the right sleeve only to travel out the left sleeve and into the glass. “Double Vanish and Recovery” and “Casanova Card Trick” are available in Marlo’s book Deck Deception, and the “Poor Man’s Trick” is explained in Bull’s-Eye Coin Tricks. I did not find “Theory of Change, Disappearance and Reappearance” reprinted anywhere, but Sid Lorraine had a copy of it in his files which are available at Conjuring Arts.

Finally, here are some biographical pieces about Marlo.