Ricky Jay Is An American Master! 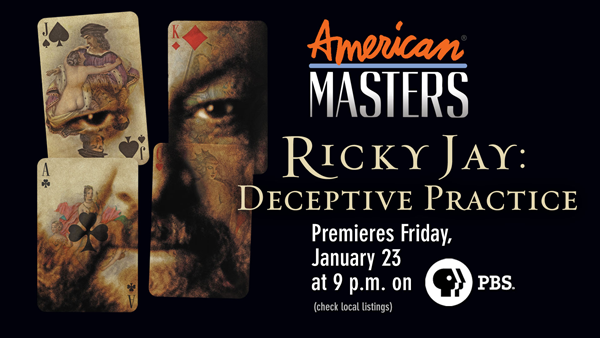 Our great friend Ricky Jay is being honored as the next American Master. The landmark series has chosen last year’s documentary about Ricky to launch their new season on January 23rd at 9pm.

Launching the series’ 29(th) season, American Masters — Ricky Jay: Deceptive Practice premieres nationwide Friday, January 23, 9-10 p.m. on PBS (check local listings) and journeys into the mysterious world of sleight-of-hand and the small circle of eccentrics who are its perpetual devotees. Told largely in Jay’s own distinctive voice, the documentary traces the story of his achievement, beginning at age 4 as apprentice to his grandfather Max Katz, an accomplished amateur magician, and features rare footage of some of the most influential magicians of the 20th century: Cardini, Slydini, Al Flosso, Dai Vernon and Charles Miller.

Narrated by Dick Cavett, American Masters — Ricky Jay: Deceptive Practice weaves together new interviews with Jay, his friends and collaborators, including writer/director David Mamet, and rare performance footage from his one-man shows and classic TV appearances, among them a hilarious turn with Steve Martin on Dinah Shore’s 1970s program. Filmmakers Molly Bernstein (editor, American Masters — Jerome Robbins: Something to Dance About) and Alan Edelstein (Oscar-nominated producer, The Wizard of Strings) explore the arduous demands of the magician’s craft, the use of language and storytelling central to the art, and this ancient tradition’s future.

“All of the arts are forms of magic, and the wonderment, mystery and pure joy of seeing a master like Ricky Jay perform is a thrill like no other, ” says Michael Kantor, executive producer of American Masters. “This intimate film makes you marvel at his genius and allows you to peek behind the curtain at many of the greatest magicians of the last century.”

“I am truly honored to be included in this iconic series, and grateful to be able to introduce viewers to the great sleight-of-hand artists who were my mentors and my inspiration,” says Ricky Jay.

To take American Masters beyond the television broadcast and further explore the themes, stories and personalities of masters past and present, the companion website http://pbs.org/americanmasters offers streaming video of select films, interviews, photos, outtakes, essays and other resources. American Masters is also seen on the WORLD channel.