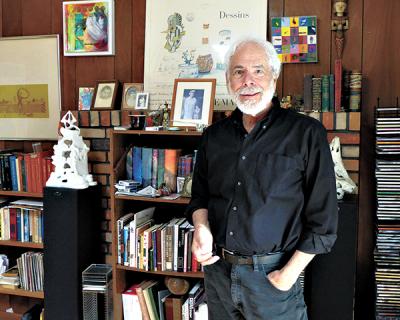 “the hook for my show is the history of magic. I’m an academic at heart.”

Allan Zola Kronzek is not your stereotypical magician. During a recent conversation at his house in Sag Harbor, he neither pulled a rabbit out of a hat nor sawed his wife, Ruby Jackson, in half. It became clear very quickly that he is a scholar who has written four books, with a fifth on the way, and whose “act” is steeped in the history and psychology of magic.

But he does tricks, too.

He recently brought a relatively new program, “Magical Jews: The Life and Times of Great Jewish Magicians,” to Temple Adas Israel in Sag Harbor and the 92nd Street Y in Manhattan. “I’ve been doing it for about a year. There were a lot of Jewish magicians in the early=20th century. Houdini is the best known today, but at the time Alexander Herrmann was just as well known. And he was a better magician. Houdini was really more famous as an escape artist.”

Because his preferred venues for his magic act are museums, libraries, and schools, “the hook for my show is the history of magic. I’m an academic at heart.” He works on Long Island and in the city, teaches magic at the Ross School summer camp, and sometimes does strolling magic at parties.

“If I’m doing a history-of-magic show, I start by explaining that magic is not supernatural; it’s special effects. I then do an example by making salt disappear and then reappear elsewhere. The first written description of a magic trick is from ancient Greece. In those days, you’d stand behind a table, surrounded by fire-eaters and other performers, and you would do the cups and balls, which is where the balls disappear and reappear under the cups. There are lots of basic magic effects in that one trick — vanishings, reappearances, transpositions, turning things into other things.”

A PowerPoint presentation he uses in his historical shows includes the earliest known image of a magician, which dates from 1405. That figure, too, is manipulating cups and balls. There are also paintings by Bosch and Breughel that include magicians. Magic from the Middle Ages evolved, Mr. Kronzek explained, with the advent of the scientific revolution, “which changed the way people thought about magic. Magicians began to perform at fairs and in rented theaters in the 1700s.” His programs usually conclude with the early-20th century.

Mr. Kronzek was born and raised in Pittsburgh and became interested in magic at an early age, acquiring a Mr. Magic set when he was 10. “Magic sets were good when I was young,” he said, “much better than the ones out now. I liked everything about it — the props, the secrets, and, though I was shy, I apparently liked performing.”

When he was a teenager, he had a show for 8-year-olds and became a junior member of the International Brotherhood of Magicians in Pittsburgh. “I was exposed to more sophisticated card magic there. The world opened up a little, and I was lucky there was a used-book store near my home that was owned by a magician. There was a big magic shelf, and I bought a lot of books.” Not surprisingly, books, not props, fill several bookcases in his study.

Mr. Kronzek enrolled at Carnegie Mellon University where, as a freshman, he did a few magic shows at coffee houses and learned how to do hypnosis. “It was a strange thing for an 18-year-old to be doing, putting a room full of people under. It was a real power trip.”

After a year, having realized Carnegie Mellon’s drama program wouldn’t help him become a film director, he transferred to Bard, where he considered majoring in psychology but eventually chose English. “I stopped doing hypnosis, but my interest in psychology was and is still very strong. I like reading all the new studies in perception, and in the last few years neuroscientists have become interested in magicians because they figured out long ago how to manipulate and control the attention of people with very subtle means.”

After graduating from Bard, Mr. Kronzek embarked on a number of careers that did not involve magic. First he moved to Hollywood to take a stab at the movie business. He was commissioned to write a screenplay, but it was never produced, and after a year he returned to New York and began studying jazz piano. He supported himself as a freelance writer doing reviews for Downbeat magazine, paperback jacket copy, and “tabloid trash.”…Read the rest in the East Hampton Star