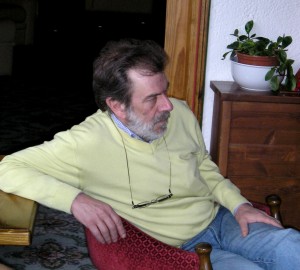 Vanni Bossi was a classy scholar who diligently pursued excellence and he was a model of such artistic intent. This is why it’s challenging and perhaps futile to find an apt and summarizing word or two to pin like shiny medals on Vanni’s yet-to-be-passed mantle.

“Class act” comes to mind. So does “quiet elegance.”

The last two words suggest other considerations because he was indeed an aristocrat of scholarship. He researched, read and studied the roots of our art form; and deeply cared about everything he investigated. This had a humbling effect on him because when he spoke and performed, he did so without any swagger or ostentation. A different kind of assurance was at work. His modesty gave rise to a subtle and winning kind of gravitas. Slowly and surely he made the most of available time. Gradually and unfailing he cast spells and while doing so he managed to radiate an old-world, sweetly seasoned, charm. But most of all, he eschewed anything that might trivialize or discredit the art form he loved, which is why his level of creativity was cutting-edge. It always seemed as though he was distilling four centuries of mystery and manners—all served up with grace and civility.

Vanni’s research drilled down deeply. Details mattered. Patterns had to connect. If a subject such as the mnemonic use of playing cards interested him, he would start digging and would eventually find and reprint works dating back to 1593 such as Horatio Galasso’s Giochi di carte bellissimi di regola, e di memoria. He might also take time out to add a clever touch to an old gimmick or figure out a new way to perform the coin-in-bottle trick, using an ordinary coin and bottle and no gimmicks. His goal was to seek perfection and make mystery meaningful and relevant to the laity.

Looking back over his legacy, the “astonishments” he created were also astonishing. Over and over he was about to find or create  clever ways to expedite and purify methods. For example, when many magicians were performing gimmicked versions of pen-through-anything, Vanni created a method for convincingly shoving an ordinary pencil through a dollar bill without damaging it. In front of a discerning group of experts at FFFF, a selection was signed and lost in the deck. The deck was then ribbon-spread face down on the table. Next, he held an inverted glass tumbler with one hand and swept it across the spread of cards and—voila!—the selection visibly appeared inside the tumbler! No gimmicks. No fiddly-dee! Done! Boo-Ya!

Stephen Minch is at work on a book about Vanni Bossi and his legacy. When it arrives, greet it with outstretched arms and a receptive heart.