Egyptian Hall Museum is the oldest private magic museum in America, started in 1895 by W.W. Durbin and later nurtured for nearly fifty years by David Price of Brentwood, Tennessee. Mike Caveney and George Daily acquired the museum in 2000 and today Mike curates the collection in Pasadena, California. Mike Caveney is a well known magician, historian, writer and publisher of books on the history and practice of magic. His historical works include biographies on The Great Leon, Servais Le Roy, Harry Kellar and Charles Carter. For Taschen Books he co-wrote a massive tome called MAGIC 1400s–1950 which has been translated into six languages.

In a regular feature on the Conjuring Arts website, Caveney will be sharing some of the treasures from Egyptian Hall Museum. 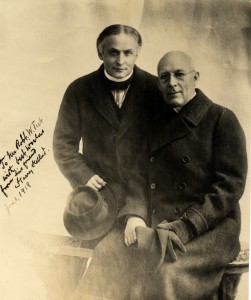 When asked to name the greatest magician of all time, most non-magicians would name the only one they could recall: Harry Houdini. While it’s true that Houdini always included magic in his show, he was most famous for being an escape artist, and later for his efforts in exposing fraudulent spirit mediums.

If you were to ask Houdini who he considered to be the greatest magician, his answer would likely have been Harry Kellar. Born in Pennsylvania in 1849, Kellar spent the first part of his career touring the world. In 1884 he returned to the United States and until his retirement in 1908 he performed solely for North American audiences. When Alexander Herrmann—Kellar’s main rival as America’s foremost magician—died suddenly in 1896, Kellar spent the final twelve years of his career as the uncontested King of Magicians.

When L. Frank Baum’s classic American fairytale, The Wonderful Wizard of Oz, was first published in 1900, Harry Kellar was at the peak of his fame. It is not surprising that illustrator W.W. Denslow’s drawings of the wizard bear a striking resemblance to Mr. Kellar.

At the time of his retirement Kellar was not only adored by his fellow magicians but by the general public as well. After years of circumnavigating the globe Kellar chose to live out his days under the sunny skies of Los Angeles, California. He loved driving his Cadillac to the nearby beach, up into the San Gabriel Mountains or through endless miles of orange groves. By contrast, Houdini lived in New York City, the center of the American show business world.

Houdini idolized Kellar. He lured him out of retirement for one last benefit performance at the New York Hippodrome Theater in 1917. It was during this visit that the two friends posed for this photograph. Each year Houdini begged his friend to make the five-day train trip to New York so he could be feted at the annual banquet of the Society of American Magicians. On a number of occasions Kellar acquiesced allowing Houdini to bask in his friend’s reflected glory.

This photograph was signed to Kellar’s old friend, Robert W. Test, a Baltimore magician who was president of The Demons’ Club and a chief executive of the Better Business Bureau.