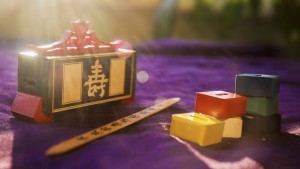 In my inaugural column we explored some magic theory as it related to the use of the term “trick.” As we discussed, many magicians hate the word “trick” so much that they will spew utter nonsense just to keep from saying it. One cause for this distaste is rooted in the performer’s ego. The idea of a “magic trick” suggests to the audience that a special prop or device, something that anyone could buy if they only knew where to find one, was the cause of the miracle the audience has witnessed and not the skill of the performer. But, as any passionate magic collector will tell you, there are props and tricks which are specially made just to create a miraculous moment, and some of these “tricks” are pretty darned amazing. Their inventors and builders manage to combine engineering, design, psychology, craftsmanship, creativity, and even sleight of hand into these amazing products that can amaze and befuddle as deeply as any other magic experience, by any name you wish to call it. I love “magic tricks.”

Some of the most beautiful magic “tricks” ever presented were the design and creation of a Dutch magician named Eddy Taytelbaum. Eddy is 91 years old as of 2016. Like many, his interest in magic began in childhood. An early leg injury sent him into the hospital where he discovered a book on magic. He was attracted to a particular piece of card conjuring which necessitated remaking a standard card into a special magic changing card. His talents for arts and crafts served him well over the years, working as he did at various times as a sign painter, carpenter, and book binder.

Later in life he bought his first book on magic and began performing for schools and special occasions. Eddy was clearly a serious student of the art. During his career Eddy won numerous awards, including two gold and two bronze medals in close-up magic and card magic at the triennial World Championship of Magic presented by the Fédération Internationale des Sociétés Magiques (FISM)—considered by some to be the Olympics of magic. He was good friends with, and highly respected by, some of the greatest magicians of his era, including the legendary Fred Kaps. Sadly, most magicians today have never heard of him or the wonders for which he was responsible.

I first learned of Eddy through my friend and collectible magic dealer Kenna Thompson. Kenna and Eddy are good friends and Kenna had learned many of the master’s masterpieces. I have never seen magic props so beautiful. Each piece is truly a work of art. Intricate Chinese lettering and gold inlays are juxtaposed with sleek modern plastic that shines like ebony. The props are more than beautiful—they are amazing! Each piece is clever and entertaining, and none of them work the way you think they might. I don’t know how many times I had “the hose turned on me” as Eddy’s tricks took unexpected turns. These pieces of “micro-magic” are highly coveted by magic collectors today.

Perhaps Eddy’s most sought after piece is his rendition of the Wandering Mummies. This effect has been produced in different versions by several well-known craftsmen, but Eddy’s remains the gold standard. These pieces are used to tell the story of a mummy’s curse. 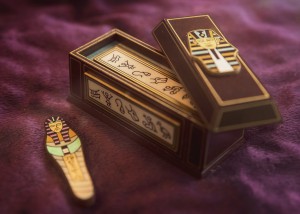 Eddy’s other handcrafted miracles include playing cards that disappear in front of your eyes, skulls and crossbones that dance between paddles and blink in and out of existence, rings and blocks that magically penetrate solid rods, and many other mechanical wonders.

While Taytelbaum is perhaps best known for his handcrafted props, I would be remiss not to mention that Eddy is also a master of sleight of hand magic, from coin tricks to card tricks and more. I have heard tell of one of his pieces. I do not know how accurate this is, but what I was told was that Eddy would clearly show both sides of four blank pieces of card. He would hold two of the cards by their corners in his lips. He’d slowly rub the other two together and the faces of two Kings appeared to materialize.

Gently he’d turn them over, and there were now playing card backs printed on the once white surface. As you looked up to smile, you’d notice the two cards between his lips were now Kings as well! Four blank cards, visually transformed into the four Kings.

At coin magic Eddy was ahead of his time as well. Famously, Eddy would show two coins cleanly. They would be held above the top of the table. Both would be dropped from above. You could see them fall through the air, and as they hit the table one coin seemed to melt into and through the wood itself, dropping into his hand held beneath the table. I believe Eddy was the first magician to discover the amazing secret at work in this trick. Many magicians use it today in a wide variety of tricks, but none have matched the beauty and simplicity of the original.

I am lucky to have been able to acquire a handful of Eddy’s amazing props. While I don’t know how all of them work, I have enjoyed trying to come up with my own uses based on the information I have been able to uncover through my research. This research and exploration has taken me into many of magic’s most interesting rooms. I have been privileged to visit noted collectors of Eddy’s masterpieces, compiling stories and information regarding his mysteries. I have been amazed by the pure craftsmanship and artistic design that informs his work; I have enjoyed studying the psychology of his routines and gained an appreciation for how he combines mechanical principles with sleight of hand to produce original pieces of magic. I have become a better performer by facing the unique challenges of presenting prop-based magic in sophisticated performance environments.

I feel honored to be able to feature one of Eddy’s pieces in my close-up magic shows. It never fails to bring smiles to those who see it. And what I find most interesting, most rewarding, is that even after telling everyone that what they are about to see is a magic “trick” many choose to disagree—they tell me that what they experienced was not a “trick” at all, it was magic. But one should expect nothing less from a great magician—the master of magic “tricks”—Eddy Taytelbaum. 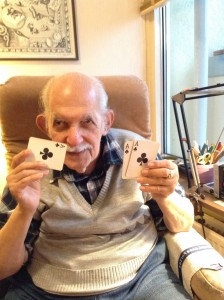 Based in Austin, Texas, Brad Henderson performs at and produces custom, private, and corporate events all over the world. He is a collector of magic props, books, and posters, Japanese puzzle boxes, automata, contemporary art, Disneyana, and all sorts of other oddities. He is a published author and recognized expert on magic, mind reading, and hypnosis. www.austinmagician.com www.bradhenderson.com