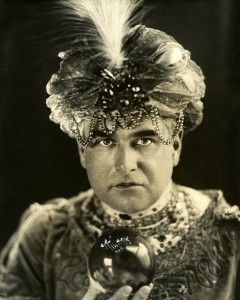 This exotic looking wizard did not travel to America from the mysterious East. His name was Charles Joseph Carter, born in New Castle Pennsylvania in 1874. As a teen-ager he was already performing as Carter –The Boy Magician and what he lacked in artistic ability and creativity he more than made up for with ambition and fortitude. Attending law school in Chicago provided him with skills that served him well throughout a long career. He formed a booking agency called The National Theatrical Exchange; he started a theatrical magazine called The Chicago Footlights and for a few short years he owned the famous New York magic company (Martinka’s Magical Palace) before selling it to Harry Houdini.

In 1921 Carter lost a fortune filming The Lion’s Bride in South Africa, a movie that was written, produced, directed and starring Charles Carter. Orson Welles he was not. In 1933 he lost another fortune when his Temple of Mystery at the Chicago World’s Fair closed after just two months of miserable business. But over the course of three decades Carter the Great made seven long trips around the world where he presented a three-hour show of magic and illusions. The secret to his success was that rather than appearing in major cities where he would be competing with the greatest magicians in the world, he played the far corners of the globe where audiences rarely saw anything like what Carter had to offer. His world tours could easily last more than two years and during those circumnavigations of the earth he lived like a king, staying in fine hotels, eating in the best restaurants and traveling in first-class cabins aboard trains and steamships. Back in the States he eventually built a beautiful home overlooking San Francisco Bay and purchased a large apartment building as an investment.

If you look closely into the crystal ball you can see “Wilcox SLC.” Rather than being a peek into the future this is actually an inscription by Ida Wilcox, the photographer in Salt Lake City, Utah who took this photo in 1922.