ON: WORD 2 – Parasites, Precursors, the Relativity of Originality, and the Grand Scheme of Things? by Jon Racherbaumer 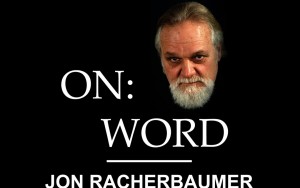 OF ORIGINALITY, AND THE GRAND SCHEME OF THINGS?

“Nothing of me is original. I am the combined effort of everyone I’ve ever known.”

Consider the word “origin,” including its origin.

Some back-trackers have tracked this word’s origin to early 16th century. Derived from the French origine or the Latin orfiri, it basically means,  “to rise.” As a handy-dandy noun, though, it refers to the point or place where something begins, arises, or is derived.

If this is the case, where do ideas and tricks begin, arise, or are derived?

I also mention this because cyclic topics (originality, provenance, and plagiarism) recently and momentarily made the news. I’m speaking here about the in-house blowback prompted by Richard Jones winning Britain’s Got Talent. Perhaps the reason this lit up Magicdom’s Blogosphere is two-fold…or should we say, two-edged? For one thing, Jones is the first illusionist to win this British television show, which at first blush should cause most magicians to cheer. Doesn’t such a win suggest that “magic,” if properly done in today’s media, is good enough to be richly rewarded? [1]

Reaction in the blogosphere, however, was quick and effete. (Tweets in a teapot?) Most of the blowback emanated from outspoken protectors and agitprops in the magic community. However, contest judges and the public-at-large differed. If they considered Jones’ presentation worthy and wondrous, squawks to the contrary from a not-so-silent minority falls onto deaf ears. Do protestations and gripes by rival professionals really make a difference? The Guardian reported, “Magicians have been overjoyed at the win, with the Magic Circle, Britain’s world-famous club of professional magicians, tweeting to say it was proud to see a member finally taking the £250,000 prize. He will now have the chance to perform at the Royal Variety Performance.”

The protests from the magic community were more or less based on a few provable claims. The gist is stark and lackluster: Richard Jones performed tricks he “borrowed” (code word for “stole”) from other magicians—namely Paul Daniels, Oz Pearlman, and Collins Key. These claims, which are true to the extent these “borrowed” tricks can be traced to “renditions” previously performed. This, however, is not the end of a story seldom told or further tracked. I agree with Ralph Waldo Emerson who wrote, “All originality is relative.” Moreover, every library is replete with “origins” of every kind. Everything is connected. Every magical idea, sleight, technique, trick, presentation, yes, every meme is ancestrally connected to other memes. (The Conjuring Research Center’s library, for example, is a vast repository of connected and connecting memes.) Just ask Alexander.

I dearly love the phrase (“We are parasites of our precursors.”) almost as much as I love the term, “meme.” I’m also derided for making these things part of my mantra. The “parasitic” part of the phrase sounds negative, conjuring up images of worms and vampires. Yet our Published Record is rife with reinventions, sly “borrowings,” and flagrant examples of plagiarism. Ah, that down-and-dirty P-word! It sounds like a neurological disorder and apologists of every stripe tend to look away (not askance). Relax. Take a deep breath. Repeat after me: “Borrowing is not a criminal act; it’s more like a mild disease.”

If you think I’m exaggerating here, you may want to read Thomas Mallon’s Stolen Words (1989). This lively and informed history of plagiarism from the 17th Century to the present answers questions such as: “What do Coleridge and the author of Falcon Crest have in common?”) After you read this book, check out Alexander Lindey’s Plagiarism and Originality and Maurice Salzman’s Plagiarism: The Art of Stealing Literary Material. By comparison, you will discover that plagiarism in the magic world is paltry and small-minded in comparison to the rest of the world.

“…plagiarism is something that people may do for a variety of reasons but almost always something they do more than once…almost all of us—writers, common readers, academics—prefer gossip about plagiarism to real inquiry; in fact, we usually show such distaste for its investigation that the taint of small-mindedness can hang over even the most considered accusations. We are also at least as uncomfortable dealing with charges against the long-dead great as we are with those against the living obscure. And, too, we often, and mistakenly, see plagiarism as a crime of degree, an excess of something legitimate, ‘imitation’ or ‘research’ that has gotten out of hand.”

Yes, plagiarism (in our tiny part of the global village) is a “crime of degree” and is often treated like a perverse form of flattery. Few magicians get overly excited or concerned unless they have been personally victimized by plagiarism. Only then will they express a pained sense of violation. Only then will they squeal that their precious creations have been kidnapped and adopted without their permission.

Perhaps it would be more appropriately saner in the long run to say:

In our parochial, gossipy sub-culture, trafficking of ideas and tricks is a busy, complicated business. This is particularly true due to the Internet, YouTube, and social media. All of this provides magicians with incredible access to every kind of information. Millions of memes freely float and they are not usually tagged with vast, interconnected histories. They do not come with maps or a guide or concordance.

So…what should be taken away from the flap?

Yes, Richard Jones is guilty of “borrowing.” Yes, he performed a combination of memes (mostly related to methodology.) But he did something important that’s been overlooked: The memes he borrowed were framed by a compelling narrative was infused with relevance and emotion. Appearing in a military uniform, he told a story—a touching tale about a soldier was a British prisoner of war during World War II. That man—Fergus Anckorn—not only survived that experience, he became the longest serving member of Britain’s Magic Circle. Also, during the telling of this tale, Jones performed a trick that Anckorn performed to beguile guards to get food. To cap off everything, he ended his performance by introducing the 97-year-old Anckorn to the audience and judges.

Needless to say, the result was palpably obvious. Simon Cowell, who is parsimonious about praising, summed it up by saying:

“What a respectful, appropriate time to do something like that! Amazing! I salute you Fergus, thank you for everything you’ve done.”

Jones humbly expressed his own gratitude and, although he was probably unaware of it at the time, he had successfully done somethingJean-Luc Godard said was worth remembering:

There you have it.

Jones took his performance of borrowed memes to another level. He gave it context. He told a human story. As a result, he was justifiably rewarded and, inferentially, so was the world of magic.

Meanwhile, the cyclical topic of plagiarism and “creative borrowing” (intentional and unintentional) will continue to percolate just below ground level. Memes will multiply with viral intensity. And magicians, as they have always done, will borrow, imitate, recreate, perpetuate, prattle and whine.

Perhaps a day will come when good fellows and feisty combatants in the Imitation Game will prefer real, deep, and abiding inquiry than idle gossip about plagiarism?

Maybe then they will recognize their rightful and realistic place in the Relativity of Originality and Grand Scheme of Things?

[2] For those unfamiliar with the term, it is “used to acknowledge responsibility for a mistake.”