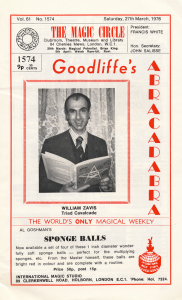 The research center holds a vast trove of correspondence between a great number and variety of magicians. One section of the collection comes from William Zavis and is especially valuable for research purposes because he generally kept copies of his outgoing correspondence along with the letters he received. Further, Mr. Zavis worked as a US Foreign Service Officer for the United States Information Agency, or USIA, which meant he was stationed in a number of different countries, making his correspondence decidedly rich in its variety of locations and number of correspondents.

The USIA was an agency devoted to public diplomacy established in 1953 and integrated into the Department of State in 1999. Public diplomacy refers to the way in which governments interact with the citizens of other countries, as opposed to how they interact with other governments. The USIA’s officers were engaged in a variety of activities including radio broadcasts (Voice of America), TV shows, book translation, magazine publication and administrating Fulbright scholarships, all done in an effort to get the people of a nation aware of the United States’ policies, lifestyle, etc. Sometimes these activities, as they were not always in line with the views of the governing body whose people were being targeted, ended up being quite dangerous. Some of these stories can be read in USIA 1953-1999: A Commemoration (Available here).

Mr. Zavis may not be known to all of our visitors, so we have assembled some background information in addition to a selection of some of the more interesting letters from the collection.

Mr. Zavis was born on the 8th of August 1935 in Chicago, Illinois. At the age of five, he saw the magician Joe Davis perform, which started his interest in the art1. His fascination with magic continued as he got older, and he worked professionally before becoming a US Foreign Service Officer. Performance art interested him, and he did some work in the theater. Here is a notice from The Linking Ring about one of his performances:

During the Easter season, probably the world’s most unique version of The Robe was presented in Chicago by a little theatre group. The unique aspect lay in the fact that four leading members of the cast were magicians: Vic Torsberg, Ward Bentley, William Zavis and Professor Fabian.2

In addition to acting in plays, he also worked to write, direct, and produce:

Bill Zavis, Chicago magician and dramatic student, now studying in Oslo, has just produced The Country Wife and is now doing Look Homeward, Angel for the National Theatre there. Between times he is doing private magic dates; had a photograph and story in the daily Oslo paper. Bill studied Norwegian for a year before going over.3

Last month George Davenport brought to the Club Room an interesting and versatile visitor. This was William Zavis, one of the many magicians from Chicago and a friend of the Marshalls. He has been a professional magician in both U.S.A. and Norway. In fact he was the first magician to appear on Norwegian television and is now a producer at the National Theatre in Oslo.4

Although Mr. Zavis worked in the theater when possible, his real work was with the US Foreign Service. The job took him all over the globe including South Africa, Norway, Sweden, Belgium, and Canada, among others. The following comes to us from the New Tops when Mr. Zavis was working in Canada:

Americans Bill and Carol Zavis and their young daughter, Alexandra, are living in Montreal while Bill is employed in the U.S. Foreign Service. He works around the magic shop on his day off and has become an enthusiastic supporter of Magic Montreal. 5 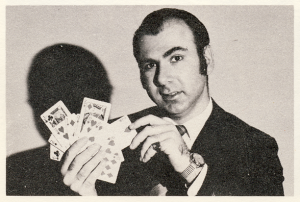 In addition to all of his other activities, Mr. Zavis found time to author several pieces for various magic magazines over the years. One article, “First Appearance in the West of China’s Premiere Circus: The Great Circus of China Tours Canada”, had to do with a circus from China that Mr. Zavis witnessed; the piece was published in Abracadabra magazine Vol. 73, No. 1886, p. 419. He compares the magician in the circus with western magic and also with other circus troupes from around Asia. Mr. Zavis also wrote a biographical article about his friend Topper Martyn. It appeared in Genii magazine Vol. 42, No. 3, p. 152 in March 1978. His writing was not restricted to historical topics; Mr. Zavis authored an article on theory for Jon Racherbaumer’s Sticks and Stones magazine in which he went into his thoughts on Rick Johnsson’s “Too Perfect Theory”. He also had 8 installments of his own column in the Gen called “Just Between Us” (1967-1968, Vols. 23 and 24). These articles featured methods for the side steal and other card sleights, as well as an ambitious card routine, a trick with balls, and a multiple card location. The series was augmented with a special installment in the New Pentagram as part of a tribute to Harry Stanley.

Mr. Zavis also worked out a number of handlings and effects which he shared with the fraternity through a variety of mediums. He sold several sets of his lecture notes over the years. Further, he contributed many effects and articles to a variety of magazines including Abracadabra, Arcane, Epilogue, Gen, Genii, Kabbala, Linking Ring, Magic Circular, Pabular, Phoenix, New Pentagram, New Tops, Spell Binder, and Sphinx, as well as to Karl Fulves’ book Faro and Riffle Technique. One contribution of particular note was a cover piece run in Abracadabra magazine Vol. 61, No. 1574. It featured a photo of him on the cover holding his book and detailed three of his effects in a feature called “Triad”. 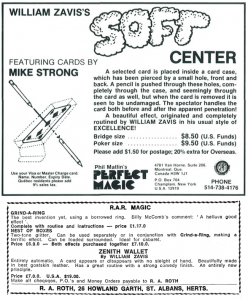 Mr. Zavis also advertised a trick he marketed for a while called Soft Center. This was a penetration effect where a card placed in the card case remains undamaged even though a pencil is pushed through the case. Additionally, an effect whereby a card could appear or disappear from a wallet was offered called the Zenith Wallet.

Mr. Zavis’ major contribution to the literature has been his book, Divers Deceits. It features effects with the Cups and Balls, the Okito Coin Box, cards, balls, and coins. There is a review of the book in The Magic Circular: Divers Deceits Review.6 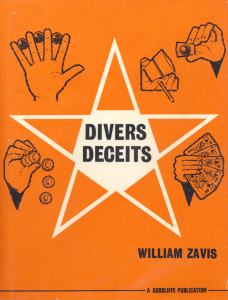 Mr. Zavis wrote a follow up book to Divers Deceits called Sundry Deceits which is, as yet, unpublished. Apparently Mr. Zavis tried to work out a deal with a number of publishers, but to no avail.

Mr. Zavis’ material is generally very practical and workable. Because he enjoyed working in the theater, it is not surprising that he did a number of lectures, performances, and even competed in FISM. Here is a response, from John Le Rossignol, writing in the Magic Circular, to one of his lectures which offers some details as to what it might have been like to attend: Zavis Lecture7

As mentioned previously, Mr. Zavis competed at the 1973 FISM in the category of Micromagic where he came in 3rd place, just behind Jean Merlin (France), with first place being awarded to Camilo (Spain). Additionally, Mr. Zavis was awarded an A.I.M.C. in 1974 and an M.I.M.C. in 1976 from the Magic Circle in London.

Unfortunately there is not much mention of Mr. Zavis in the literature we were able to unearth from the late 80s and 90s. Correspondence with his daughter, Alexandra Zavis, reveals that, as he advanced in the foreign service, work started taking up more and more of his time. In 1989, he was diagnosed with a brain tumor and his health deteriorated rapidly afterwords.8 It appears that he finally made his home in Washington D.C. where he died on Friday, Dec. 17, 2004 at the age of 69. We end this section with our favorite passage regarding Mr. Zavis, from the Linking Ring:

There are some people who do get around and pop up in all the most surprising places. One of these is Bill Zavis. When I thought he was still playing night clubs in Norway (in Norwegian, yet), he turned up backstage at a kid’s settlement house I worked, right here in Chicago. Then his mother told me he was living the arty life in Greenwich Village in Off-Broadway shows. Now I have a letter from Abidjan, Ivory Coast, Africa, from that same Bill Zavis, using an American Embassy address and telling me he is Cultural Attaché. Part of his work involves doing magic, sometimes for ambassadorial circles, sometimes for natives, and this time he works in French. Harris Solomon will remember this youth as the one who swiped the sign off the University of Chicago Atomic Center building when it was demolished to make room for the bigger and better Nuclear center — Harris wanted that sign very badly, but I’ve forgotten why just now. In any case, we delivered it courtesy Bill Zavis.9

The following letters from the Zavis correspondence represent just a small selection of what is available, see the finding aid for a complete list, but they should prove interesting nonetheless. Any letters discussing methods have been left out. The Donald Bevan letter features a short biography of Mr. Zavis. There is a letter from Alex Elmsley, one of the true greats. The Topper Martyn letters were interesting since they lead up to Mr. Zavis writing a biography of Mr. Martyn, and we get to see some of the process that Mr. Zavis went through. Finally there are letters between Mr. Zavis and Hugh Garlick which pertain to the arrangement of a lecture.