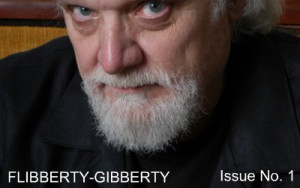 Conjuring Arts is very proud to have Jon Racherbaumer writing an exclusive periodical for us. FLIBBERTY-GIBBERTY will appear from time to time and at Jon’s whim.

Magicians are in a unique position to be cavalier about fakers and frauds who are not transparent about what they do. Unlike magicians who are unambiguous liars and deceivers, fakers are hidden deceivers; they are unethical and deserve to be exposed. This is also why magicians tend to admire debunkers who expose fakers and show the consequences of irrational behavior and bogus belief systems.

Speaking of forthright practitioners of deception (as entertainment), I always admired David Hoy, who usually began his night-club act by saying, “My name his Dave Hoy and I’m a fake!” (Hoy, as many old-timers will remember, was a showman who managed to exploit the public’s willingness to believe (anything) in various venues, guises, and personalities. And, yes, it’s true. Most human beings tend to interpret what they personally experience regardless of what you might confess (as a disclaimer) or through purposeful omission fail to disclose.

When I was a university student I played what turned out to be a cruel joke on my roommate, who often saw me perform magic tricks at different times. One night he asked the stereotypical question every magician hears: “How do you do that stuff?” Rather than giving him a stock response, I made a preposterous claim. With a straight face and a serious tone of voice I said, “To tell you the truth, Fred, I’m not from here!” His initial response was to scoff. Nevertheless, I persisted. I remained gravely earnest and, despite his rational protestations to the contrary, I continued making a cogent case that my claim was true. It took about two hours to dissolve his skepticism. (I wish I had a tape recording of my arguments that night.) This unlikely conversion occurred because I discovered the tenets of his belief system and then systematically designed strong counter arguments to support my claim. Once I knew what Fred was willing to rationalize and accept without any rigorous critical thought by him, the rest was a matter of repetition until he surrendered. He eventually believed that I was a true alien “not from here,” but from some other, unspecified place.”

At the time, I thought this was an elaborate but harmless stunt. In fact, afterwards I admitted that I was “jerking his chain” and the whole thing was a sham. I figured that Fred would be momentarily irked, but his would eventually laugh it off. Instead, Fred flashed the most gravely serious look at had ever seen and said: “I know what you’re doing. You’re just saying that because you’ve divulged too much to me. Therefore, you now must deny everything!”

I pleaded, argued, and cajoled that the whole thing was an elaborate joke and Fred refused to accept my confession.

At the time I thought that this was, in part, due to Fred having to repudiate another, though current, belief system (of which my outrageous tale was a part).

Debunking belief systems is risky business. Belief systems are holy to those holding and espousing them, regardless of how wacky, irrational, or stupid they may be. (Consider what happened to Freud when he attacked religion in his famous work, “The Future of an Illusion”?)

Belief systems are also the stuff of happiness, succor and hope. Debunkers are seldom as successful as fakers and frauds, and I’m reminding of C. S. Lewis’s remark: “A great many of those who ‘debunk’ traditional…values have in the background values of their own which they believe to be immune from the debunking process” I’m also mindful of something Immanuel Kant wrote: “I had therefore to remove knowledge, in order to make room for belief.” And finally…from one of my favorite writers (Philip K. Dick):

“Reality is that which, when you stop believing in it, doesn’t go away.”

For More Information and Contact Info for Mr. Racherbaumer.